During my editing, I've come across a helpful tool in a book I have titled, The Writer's little Helper.

Use specific words. Ask yourself if your words are specific enough to identify what you want the reader to see as a mental image.

Automatic words are tired, first-draft words borrowed from pop culture. They say two kids on the phone for an hour burn no more than 100 vocabulary words. Boring.

Literal words are also first-draft words, the ordinary language in chit-chat. Men are big, women are pretty. Such words are useless and boring. Your readers yawn and yearn for more description.

Concrete words lift you to where you begin inventing words. When your written words plant a picture in a head, you become a creative writer.

You need to take automatic and literal words and harden them into concrete so your readers see the image.

Using specific words helps you distinguish people, places and things from every other person,  place or thing. You create distinctive pictures on your pages. Colors come to life. You now have moss green eyes or mud the color of chestnuts after a rain storm.

I used my Find button to locate these boring places in my manuscript and try to make them more concrete and specific.

I now have a turquoise Impala and candy apple red pick up truck as opposed to a boring car.
Eyes are like hazelnuts floating above a sea of freckles.
My dog is now a cute beagle.
My food is now more specific.
Etc. Etc. I think you get the idea.

I have also gotten rid of a lot of its! My lands I never knew "it" was in such plentiful supply in my manuscript.

Now go and invent new and specific words in your manuscript and make it a less boring read.
Of course, I am  sure most of you do this already,  but it doesn't hurt to use that

find button and check it out.

Too Many Pots on the Stove


I am  still editing! I am getting there, but still have a ways to go.
I am learning how to flesh out a story.
I think my husband should become my writing partner, he knows how to stretch out a story, if you know what I mean. He is an expert at making a one minute telling into a fifteen minute story.
I could do the plot and he could add all the details. I do not know why I didn't think of it before.

The local library had a writer's event on Tuesday. I attended a portion of it.
In a way it was a little bit disheartening. They are all published, some with many books, but have little sales. Most of the ones I got to listen to were either self published or used Print on Demand.

They kept saying how you have to keep up with the marketing. If not, you end up with a lot of money put out and a lot of books sitting in boxes in your garage.
Of course, I already knew this.

From listening to a few of them, it seems like POD is better and cheaper than self publishing.

I am still trying  to get a regular publisher. But, some day may have to go on the self publishing or POD route.

I am getting manuscripts polished to enter into the WVWriter's Contest. And in addition to my children's stories I would like to some day publish a cook book. One that includes stories along with the recipes. And, maybe a recipe/craft/article book for kids, incorporating some of the articles,  recipes, crafts etc. from my Two-Lane Livin' children's columns.

I have a lot of pots on the stove. All of them unfinished at the time and not ready to put on the table.

But I am working at it and that is one reason I do not blog as much as I would  like. I am constantly trying to get one of my 'pots' finished and out the door.

Do you sometimes feel you have too many pots on your stove, too?
Posted by Janet, at 10:18 AM 5 comments:

Did you ever get started editing on one of your manuscripts and not be able to stop?

I've been working on my middle grade manuscript, getting it ready for the WVWriter's Conference and I can't seem to stop.

I told my critique group that I wanted to make the first three chapters shine for the judges (I'm  working on the rest of it , too).

I left the meeting wondering if I could do what they suggested. I'm always afraid I'll make it worse than it was to start with.

But, I think I'm getting it.
They said that a little too many things happened in the first chapter, maybe move something somewhere else.

Check!  A small flashback that was a little confusing is now in a later chapter and in the present, not as a flashback.

The beginning needed to be more sharp and to the point.
Check !

Maybe add more descriptions to the characters.
Check! When I introduce a character, I add a little about them so the reader will get to know them better.

I've been worried all along about the length of the manuscript. It was a little short for a MG, though there are some short MG books that are published and very good.

I love " Because of Winn-Dixie" and I have the book here at the house. I noticed that is didn't seem to be very long, so I checked out the word length on the Renaissance Learning site. I was right, it is only 22,123 words.

I had fought against making changes for a long time, because this was my baby. But realized that changes had to be made if I was going to push it out out of its comfy nest to fend for itself.

Now, I just have to remember to get up from the chair every now and then to stretch my legs!

Oh, did I forget to mention, I received another rejection this week.
Posted by Janet, at 11:34 AM 4 comments:

Open Mic - What Would You Say or Do?

Tonight is Open Mic Night at our local library.

A few brave people come to pour out their heart and soul.

We do not compare to Shakespeare, Robert Louis Stephenson, Margaret Mitchell or Elvis.

Nevertheless, we are a few people dedicated to our craft, who are willing to share our words with others.

Hey, it is also good experience for when we are famous and are invited to all those personal appearances and interviews.

Did I mention that we are also dreamers?

At our open mic you are likely to hear poems, short stories, tall tales or ballads.

I have read my children's stories, poems and short stories. I have even read a recollection of a family vacation where we made a few wrong turns, missed a few turn offs, tried to decipher the local dialect and still managed to arrive at our destination - an old family cemetery.

What would you say behind the Open Mic?
Posted by Janet, at 9:28 AM 6 comments:

Getting Your Babies Ready

Time to edit and get those manuscripts ready to submit.

I usually wait until the last minute to submit, that is just the way I am.

I am fine tuning my MG manuscript to enter in the children's category. It received an honorable mention last year. I would so like it to place in the top three.

I'm looking at the beginning with a magnifying glass.
Checking for good description and detail.
Trying to find just the right words.

If you live in West Virginia or are a member of WVWriters, you can enter their contest.
Deadline is March 15th, late deadline is March 31st ($2 late fee).
The winners will be announced at the West Virginia Writer's Conference in June.
Go here for a look at the entry form and the many categories available to submit to.

Any suggestions on how to make a manuscript stand out to a judge?

Are you fine tuning any of your manuscripts for a contest or submission to publishers?
Posted by Janet, at 8:28 AM 6 comments:

Do you have a writing library?

I do, but 'my library' was scattered all about in different areas.

I searched and searched and put them in one easily accessible spot. I stacked them under my coffee table, which sits in front of my lazy boy in our family room. My computer is also in the family room and with a quick turn of my head, I can look and see them all in a row. 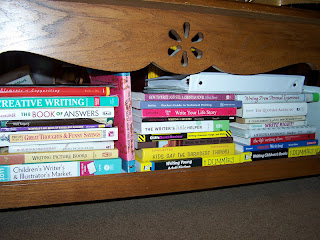 Believe it or not, most of my books have been bought at yard sales and thrift stores.
A few I have won on writer's blogs. 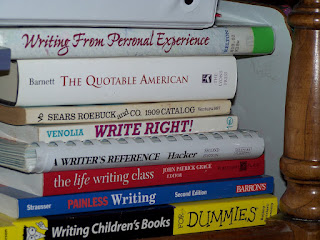 All of my books are not 'how to' books
The Quotable American and the Sears Roebuck and Co. 1909 Catalog comes in handy for writing info. 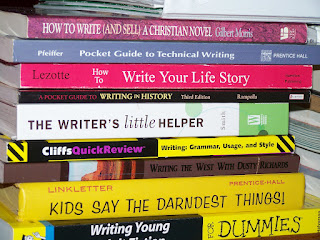 Kids Say the Darndest Things! is a great reference for children's writers. 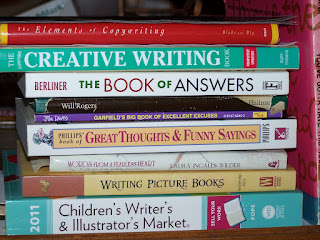 The Book of Answers, Will Rogers, Garfield's Big Book of Excellent Excuses, Great Thoughts & Funny Savings are also good for reference.
I write for children, but I also write articles and short stories and a few longer pieces.
That is why I do not just collect books on or about writing for children.
Do you have a writing library?  What type of books do you have to help you with your writing?
Posted by Janet, at 10:02 AM 8 comments:

Golden Delicious - A Cinderalla Story and a Recipe

This book tells the true story, with beautiful illustrations on every page, of how Golden Delicious apples made their first appearance on a tree "that just grew" on Anderson Mullin's farm  in Clay County, WV.  The tree sprouted by chance around 1900 and lived until the late 1950s, producing apples for most if its life.


The Stark brothers (Paul and Lloyd) dreamed of finding the perfect apple. One that would bring them  fame  and  fortune. After Anderson Mullins picked out three of the most perfect golden apples he could find in his fruit cellar, he sent them to the Stark Bro's Nursery.

An excerpt from the book:

"This just might be our Cinderella!" shouted Lloyd.
Paul Stark found it hard to wait till  the next apple harvest season. When fall finally came,  he traveled hundreds of miles to see that golden apple tree. First by train and then by horseback over winding mountain roads, he reached Odessa, West Virginia.
The sun poured down hot as apple butter just out of the kettle. His white shirt stuck to him  tighter than the skin on a grape, but he didn't care.

If you like Golden Delicious apples and beautiful  illustrations, I recommend you read this picture book.

Here is a delicious recipe you might want to try:

Preheat oven to 350. Melt butter in a 13x9x2 baking dish. Heat sugar and water in saucepan until sugar dissolves; set aside. Cut shortening into flour until mixture resembles coarse crumbs. Add milk and stir with a fork only until dough leaves side of bowl. Turn dough out onto lightly floured wax paper. Roll out to a 12x10x1/4 inch rectangle. Lay apples evenly over dough. Roll up jelly-roll style. Cut into slices, each about 1/2 inch thick. Arrange slices in pan with melted butter. Pour sugar syrup carefully around and over rolls. (This looks like too much liquid, but the crust will absorb it.) Bake for 40-45 minutes or until golden brown. Cool for 15 minutes before serving.