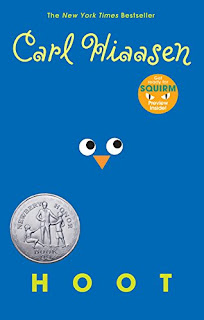 I'll be honest, I picked this book up at a thrift store. I had heard a lot about Hoot and it was a Newberry Honor Book, so I had high expectations.

Once I was trying to see how many Newberry winners I could read. I told the librarian it would be nice if they would be shelved separate from the others so they could be found easier. The librarian told me that if they did that the kids wouldn't pick those to check out. Hmmmm


Well, this book was okay, but it took me a while to get into it. I could tell the author was used to writing adult novels, by the way he wrote this book.

It was a fairly slow start with a lot of telling - the very thing I try not to do when I write. I even considered stopping, but I continued.

Then there was this thing with the bad words. I think they could have been left out.
And, although many people describe Hoot as a laugh-out-loud book, and I love humor in a book, I was disappointed. I never once laughed out loud while reading it.

For those of you who may not have read it. Roy, the main character, just moved to Florida from Montana and he isn't very happy with the change. A bully has targeted him to pick on all the time. And I can't believe the bus driver is oblivious to all of this. And very few of the adult characters in the book could be considered good role models.

The premise of the story is that Roy, a soccer player girl and her step brother join to save cute little burrowing owls where a Pancake House is scheduled to be built. I'll let you read it to find out what happened.

I am glad I continued. After I got used to the way he was writing it, the story had me wanting to see what would happen next. To me this was an okay book, but I have read better.

But, according to reviews online, many people really like it and you may, too.

Join others reviewing middle grade books over on Always in the Middle.

Thank you for your comments. I love comments!

Halloweensie Post I've entered Susanna Leonard Hill's 8th Annual  H A L L O W E E N S I E  C O N T E S T! Everyone participating writes  a 100 word or less Halloween Story that includes the words shiver, cauldron and howl !  Below are my two entries: The first one is exactly 100 words and the second one is 88 words. T he Halloween Night Talent Show   “Let the Halloween talent show begin!” howled Walter Werewolf. Barney Bat swung on the trapeze. Marvin Mummy moonwalked. Shivery Skeleton played Monster Mash on his ribs. “Piff! Poof!” Wendola Witch created candy in her cauldron.   “How can I win?” said Gabby Ghost. “All I do is juggle.” He grabbed his six tiny pumpkins and floated toward center stage. Wendola Witch stuck out her skinny shoe. Gabby tripped. Gabby flipped. Gabby spun all about and landed in the candy-filled cauldron. Sweet Goodies flew into ever

I'm a reader of writing tips.  Writing is a talent, but a person is never too old or too young to learn. I love writing, but I think I love editing even more. I love molding my story into a better story. Into the best story that I can. Editing does that. I'm always reading about finding filler words and getting rid of them. Finding passive words, vague words, redundant phrases, and common cliches and getting rid of them. I am in the process of writing a sequel to my novel, Where the Stars Grant Wishes , and I have been editing it to rid my manuscript of those filler words. Some of the words I've been searching for are IT, SOME, THEY, THEM, etc. My story had a lot of those vague words. I am one of those writers who doesn't have to lower my word count. I need to up my word count. And in getting rid of these words and getting more specific, I found that I actually upped my word count - Yeah! Another way I found to up my word count is in description. Early this morning I o

Welcome to the 10th Annual Halloweensie Writing Contest  The Contest: write a 100 word Halloween story appropriate for children (children here defined as 12 and under) (title not included in the 100 words), using the words skeleton, c reep , and mask .  Your story can be scary, funny, sweet, or anything in between, poetry or prose, but it will only count for the contest if it includes those 3 words and is 100 words (you can go under, but not over!)  Get it?  Hallo weensie – because it’s not very long and it’s for little people   Here is my 97 word entry.   TEN SCARY SKELETONS One Halloween night at the old, haunted house Lived ten SCARY skeletons and one timid mouse. Creepy-carved pumpkins flickered their light greeting ghostly goblins that roamed the dark night. “It’s gonna be a SPOOKTACULAR night! We’ll offer them treats and watch with delight As they shriek and scream and flee with fright. It’s gonna be a SPOOKTACULAR night!” Under the moonlight ten sca